NOT FROM THE ZOO BENEFITING PETA

They're not from the zoo!

8 Unique stories for Not From the Zoo

These special friends represent eight of the animals who are being exploited by the ramshackle roadside zoos and circuses that hold them captive. Learn what animals like them face – and what life can be like for them all if we join together and protect them!

Bears like Buddy have rich lives in the wild. They love foraging for food, splashing in lakes with friends, and cozying up for a long winter in their dens. Dismal roadside zoos take away everything they love – even separating some cubs from their mothers as infants. Instead of roaming free in their lush habitat, bears imprisoned by roadside zoos will spend nearly their entire lives confined to tiny enclosures and performing stupid tricks for tourists. Buddy -- and all animals -- deserve better.

Tigers like Tommy are revered by most humans, but roadside zoos couldn’t show them less respect. Tiger cubs in the wild grow up with their mothers, but roadside zoos and circuses often separate them – causing them distress. And, instead of experiencing the solitude many adult tigers prefer, roadside zoos often force them into barren metal cages to be as a cruel tourist attraction. Fortunately we can all band together and ensure that tigers like him get the freedom and respect they deserve.

Orcas like Liberty are social, intelligent, and sensitive animals who spend their whole lives with their families, with some never leaving their mother’s pod. But in captivity, their lives couldn’t be more different. They don’t get to choose who they are surrounded by, and without space or stimulation, they circle their tanks endlessly in frustration and boredom. Orcas like Liberty deserve to be able to roam, forage, and explore the oceans with their families – free from the worry of being turned into an unwilling performer.

Dolphins like Daphne are super-smart and have a strong sense of self. In the wild, they spend their lives with their pods and can get in a cool 60-mile swim in a typical day.

All of this is stolen from them when they are forced into captivity where many will be confined to shallow, chemically treated concrete pools and forced into confusing interactions with humans. When marine parks stop imprisoning them, dolphins like Daphne can forever dance through the depths of the ocean with their friends.

Chimpanzees like Chuck love to climb, play, and enjoy life surrounded by greenery. They care for other chimpanzees by passing down traditions and consoling their friends when someone is upset. They grieve the loss of their loved ones, grimace when they’re sad and laugh when they’re having fun. Roadside zoos take away their laughter – forcing chimpanzees into lives of confinement and exploitation. They are stuck in bleak and barren cages for tourists’ fleeting enjoyment. With your help, Chuck and other chimpanzees will be free from their captors and can experience life in all its wonderful forms.

Polar bears like Frosty are extremely intelligent animals who can roam home ranges covering thousands of miles.  They are also suave swimmers who can reach speeds of 6 miles per hour and cover 400 miles in a single swim, imagine an Olympic swimmer doing that!

Captivity takes everything away from them – putting them on display in cramped cages and even subjecting them to sweltering heat. Frosty deserves to live out his life free and in his vast natural habitat – not to be gawked at by tourists.

Sensitive and social elephants like Elle are the kinds of friends most would dream of having. They love being with their families, keep a watchful eye over one another, and remember their old friends. But circuses take advantage of their gentle nature - keeping them almost constantly in chains and punishing them if they don’t perform.
Instead of being forced to live under a trainer’s hook, they should be admired and respected from afar.

Lions like Larry are strong and loyal – staying close to their families for years. They love to run, climb, jump and swim in the wild. But roadside zoos and circuses can take away everything that matters to lions like him. Instead of doing stupid and confusing tricks, Larry and all lions deserve to roam the plains as the kings that they are.

Make a difference for animals with your NFTZ purchase! 60% of all sales will be donated by NFTZ to support PETA’s vital work to stop circuses, roadside zoos, and marine mammal parks from using wild animals for entertainment.

Set my animalz free!
See us at Opensea
Made with
by Ekzai Studios 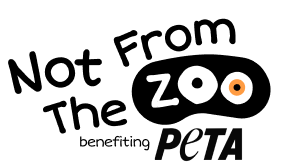